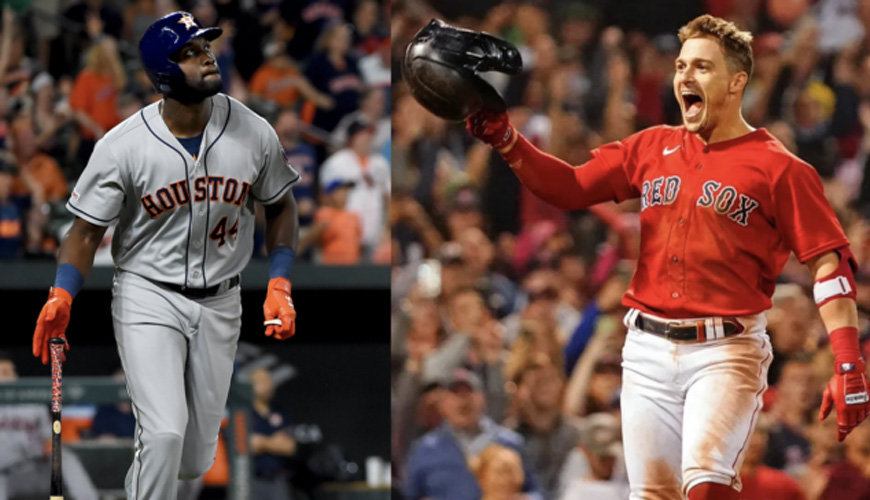 If you’ve been keeping up with the 2021 MLB Postseason so far, you’ve seen just how dominant these two hitters have been: Houston’s Yordan Alvarez and Boston’s Kiké Hernandez.

Below is an overhead shot from his homer against Chris Sale in game five:

Notice that weird thing he’s doing with his back foot? It’s not squishing to turning. It’s kicking behind him. We’ll touch on that in a second.

While Alvarez stole the show late in the series, Kiké was every bit as impressive in games one and two. He collected six hits, one double, and two no-doubter homers in ten at-bats. Below is a front view from the second one he hit off of Houston closer to Ryan Pressley in the ninth inning of game one. It measured at 428 feet:

The success both Kiké and Alvarez are having is no mistake. The magic is in how they move. What we see from their swings should tell us exactly why they’ve been hammering baseballs and giving pitchers fits.

You just have to make sure you’re looking at the right things.

In the 108 Performance level one courses, something we talk about is substance vs. style. Let’s start with style. When we look at Alvarez and Hernandez, we notice a myriad of differences. Physically, they could not be more different. Alvarez measures in at 6’5” 225 lbs. Kiké, a quick speedy outfielder, stands just 5’11” and weighs 190 lbs. Alvarez swings from the left side. Kiké swings it from the right.

In terms of the swing, Alvarez starts with a little more bend in his knees and his chest over his toes. His back toe is slightly pigeoned out. Kiké starts a little taller with his chest and with his hands much further away from his body. His back foot is square.

Now for substance. Remember that weird thing both hitters were doing with their back foot? The “kickback” move in itself is a style, but the substance behind the move is much more important. Not all hitters need to kick back, but all hitters need to anchor. That’s substance. When we look at the best hitters in the game, all of them use some sort of strategy where their back foot anchors in and gives their pelvis a stable platform from which the trunk can fire. Some hitters, like George Springer and Cody Bellinger, anchor in the ground. Their back foot gets peeled off the ground during rotation, but anchors back in after contact. Others, like Kiké and Alvarez, anchor in the air and kick back with their back foot. Both strategies accomplish the same goal. They’re just two slightly different ways to make it happen. Anchoring is substance. Anchoring on the ground vs. in the air is style.

Here’s the problem: Style depends on the individual. Substance exists regardless of the individual. If we start by teaching style instead of starting with substance, we’re focusing on the wrong things. How a hitter starts in their stance is not nearly as important as their ability to land closed, decel the pelvis, and brace their middle for impact.

Style complements substance. It should never proceed it.

If you’re spending the majority of your time on what looks cool vs. what works well, we have a couple of resources for you:

Blog: Why everyone doesn’t need to kick back, but needs to do this
108 Hitting Courses
108 Kickback & Crossbody Drills/Gifs